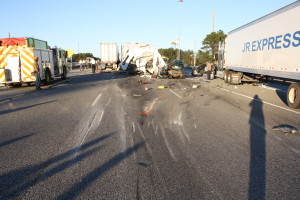 Of course, most of these factors can contribute to crashes of smaller vehicles. Most of us have experienced fatigue when driving on long trips, or have had lapses of attention while driving. But large trucks are different. Basic physics of mass and kinetic force is a big difference. Large commercial trucks weigh up to 80,000 pounds, and some of them are allowed to weigh more. Because of their greater size, it can take twice as much time and distance to stop as a passenger car even if brakes are working perfectly.

They also operate for vastly more miles per year that passenger cars, so that maintenance needs are greater.

Most truck drivers are hardworking, responsible people, but they are fallible. Their long hours, mostly sedentary lifestyle and the difficulty of earing healthily at truck stops

In investigation of the causes of catastrophic truck crashes, we explore all these common causes and more.

Ken Shigley is chair of the American Association for Justice (AAJ) Motor Vehicle Collision, Highway & Premises Liability Section which includes the Trucking Litigation Group of which he is a former board member. He is a member of the board of governors of the Academy of Truck Accident Attorneys, and a board certified civil trial attorney of the National Board of Trial Advocacy. In addition, he is lead author of Georgia Law of Torts: Trial Preparation and Practice, past president of the 45,000 member State Bar of Georgia, and past chair of the Institute for Continuing Legal Education in Georgia.