Over decades representing individuals and families devastated by highway crashes with large trucks, one of the most poorly understood hazards we have seen is that of tractor trailers parked on the side of the road. Among the hazards presented by semi trucks parked in the emergency lane is decapitation of people in an approaching car due to trailer underride.

Often late at night on Georgia highways, we see tractor trailers parked on what many people commonly refer to as the “emergency lane” next to the traffic lanes. Unfortunately, many people even in the trucking industry do not appreciate how dangerous this can be for the truck driver and for motoring public.

Stopping on the roadside increases risks of a potential deadly crash, which can be prevented through management practices that include good trip planning, vehicle inspections, and appropriate equipment maintenance.

Due to the severe risk posed by parking on the roadside, trucking company management should require drivers not to stop along the roadside in non-emergency situations. At the very least, trucking companies should instruct drivers to exit the highway and find a safe place to park when necessary.

The hazard is multiplied when large trucks park on the roadside at night without using hazard flashers and warning devices. Just about every time I make a road trip at night, I see an unilluminated tractor trailer parked in the dark inches from the traffic lane.

If a driver absolutely must stop on the side of the road, motor carriers should train drivers and dispatchers on actions that can be taken to reduce the risk of a loss in the event of a breakdown or other roadside emergency. Such actions include:

National highway design standards from the American Association of State Highway and Transportation Officials (AASHTO) recommend construction standards for shoulder and right of way design. This includes the removal of dangerous obstructions such as, trees, steep slopes, or abutments. The reason for this design standard is to clear the roadside of obstructions which hinder a motorist from being able to recover from an unintended departure from the roadway. They also recommend guardrails feasible to redirect errant vehicles back onto the paved portion of the roadway.

The Roadside Design Guide defines a clear zone as the total roadside border area, starting at the edge of the traveled way, available for safe use by errant vehicles. This area may consist of a shoulder, a recoverable slope, a non-recoverable slope, and/or a clear run-out area. The desired minimum width is dependent upon traffic volumes and speeds and on the roadside geometry. Simply stated, it is an unobstructed, relatively flat area beyond the edge of the traveled way that allows a driver to stop safely or regain control of a vehicle that leaves the traveled way.

According to the Roadside Design Guide by the American Association of Highway Transportation Officials, highway shoulders, a clear zone is

The total roadside border area, starting at the edge of the traveled way, available for safe use by errant vehicles. This area may consist of a shoulder, a recoverable slope, a non-recoverable slope, and/or a clear run-out area. The desired minimum width is dependent upon traffic volumes and speeds and on the roadside geometry. Simply stated, it is an unobstructed, relatively flat area beyond the edge of the traveled way that allows a driver to stop safely or regain control of a vehicle that leaves the traveled way.

The Clear Zone, is further defined as

An unobstructed, traversable roadside area that allows a driver to stop safely, or regain control of a vehicle that has left the roadway. The width of the clear zone should be based on risk [of immediate danger]. Key factors in assessing risk include traffic volumes, speeds, and slopes. Clear roadsides consider both fixed objects and terrain that may cause vehicles to rollover.

Thus, the shoulder of the highway isn’t designed for parking at all. It is a “clear zone” or “recovery zone” and not a parking area. But every day we see 18-wheelers parked in the “recovery zone” or shoulder, over parked overnight and not illuminated.

Personal cars and trucks are doing the same thing, but the hazard they present is less severe. When a truck driver parks an 18-wheeler or other large Commercial Motor Vehicle (CMV) in on the shoulder of a highway in what is designed as a “Clear Zone,” the driver creates an eminent hazard to occupants any vehicle which may depart, for whatever reason, from the travel portion of the roadway.

Tractor trailers parked in the “clear zone” or “recovery zone” present a vastly greater danger to people in approaching cars that would another car parked in the same position. When a car veers out of its lane and collides with a stopped car of the same size, there may be serious injuries. But when the same car collides with an 80,000 pound tractor trailer, the physics of the collision is vastly different.   Semi-trucks are not only larger and heavier than regular vehicles, but their trailers also stand high off the ground. If a car traveling at highway speeds comes into contact with the trailer of an 18-wheeler, the big rig is the perfect height to sheer off the top of the car and kill or perhaps decapitate anyone inside.

Even if a parked semi-truck is illuminated at night, there is a recognized condition known as the “Moth Effect” which may contribute to an unwary driver running into a truck parked on the shoulder. The “Moth Effect” occurs when drivers are attracted to flashing lights or other things along the roadway, especially when fatigued.  The “Moth Effect” is especially likely when visibility conditions are reduced at night or in heavy rain which is common in Georgia.

When presented with catastrophic crashes that involve a commercial motor vehicle parked by the side of the road, we investigate deeply and retain appropriate experts. We have to determine why the driver chose that particular spot to pull off and stop.  We normally download electronic control module data and other electronic records from both vehicles. Was it an actual emergency or mechanical failure? Was the driver failing to follow safety rules and simply stopped for a “break.” Did the driver have the ability to stop in a safer location?

A lot of people who see these collisions and are uninformed on the safety standards involved assume that it is always the fault of the driver of the car that struck the parked tractor trailer. Thus, it is necessary to thoroughly investigate and, we hope, refute potential defenses. If the driver of the car had a cell phone, it is worth the cost to do a forensic download and rule out driver distraction from a cell phone at the time of the crash. A reliably conducted medical examination or autopsy is needed to rule out alcohol or drug use that may have contributed to cause of the crash.

If a loved one is killed or injured due to collision with a tractor trailer parked on the roadside, call us at (404) 253-7962 for a consultation to see whether or not there is a viable case. 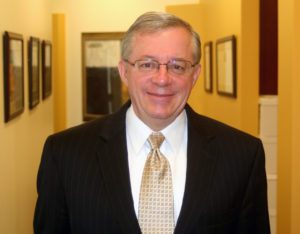 Ken Shigley is recipient of the 2019 Tradition of Excellence Award from the State Bar of Georgia General Practice and Trial Section. He is a past president of the State Bar of Georgia, past chair of the State Bar’s Tort & Insurance Practice Section, past chair of the Georgia Insurance Law Institute, past chair of the American Association for Justice Motor Vehicle Collision, Highway & Premises Liability Section, and a member of the board of governors of the Academy of Truck Accident Attorneys. He is lead author of Georgia Law of Torts: Trial Preparation & Practice (Thomson Reuters West, 2010-2018). His law practice is focused on catastrophic injury and wrongful death including those arising from commercial trucking accidents and those involving brain, neck, back, spinal cord, amputation and burn injuries. He is licensed to practice law in Georgia. Representation of clients in others states, which possible, can be undertaken only in strict compliance with the multijurisdictional practice and pro hac vice rules of the other state.